Python caught in Malaysia could be the longest ever recorded 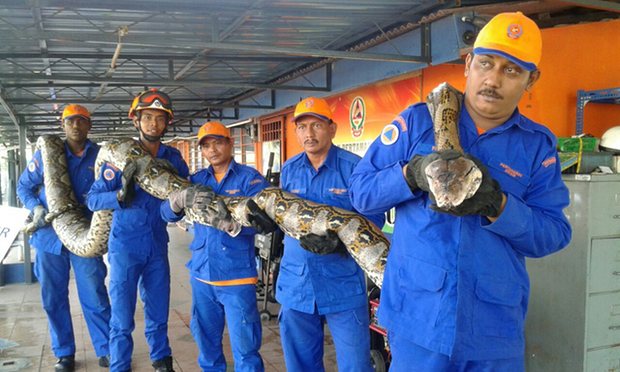 A huge python found on a construction site in Malaysia could take the record for the longest snake ever to be caught, with initial estimates at eight metres.

The reticulated python – a species found in south-east Asia and widely considered as the longest reptile species – was spotted where a flyover was being built in Paya Terubong, a district on the island and tourist haven of Penang.

Herme Herisyam, an official with Malaysian department that caught the snake, told the Guardian that workers from the construction site called the emergency services on Thursday and authorities took 30 minutes to trap the snake.

“It is eight metres in length and weighs about 250kg,” he said by phone.

It emerged later on Monday that the python died on Sunday after giving birth. Herisyam told the Guardian that the snake, which was caught on Thursday, had died after laying an egg. It is not clear why the serpent perished.

A video posted on the Malaysian Star news website showed a man kicking the python.

The Guinness Book of World Records gives the honour of longest snake ever in captivity to Medusa, also a reticulated python, who lives in Missouri and is kept on show at The Edge of Hell Haunted House in Kansas City. She was measured at 7.67 meters in the 2011 edition and still holds the title.

She is said to weigh 158.8 kg, over 90 kg lighter than the Malaysian specimen.
Before Medusa took the title, the previous record holder for longest snake in captivity was Fluffy, a 7.3m python who died in 2010 at 18 years old.

Reticulated pythons, who have a gridded pattern on their skin that gives them their name, are normally three to six metres long and can be found in water.

Longer snakes could be living in the wild. In 1912, a python found and shot in Indonesia was reportedly 10 metres long.