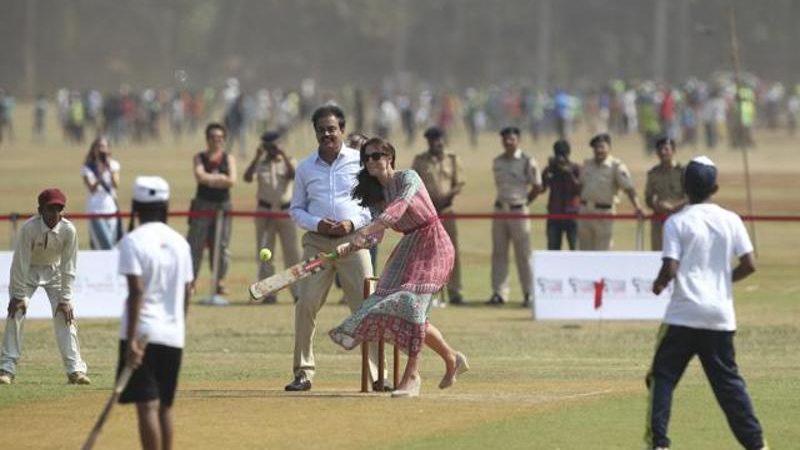 Britain’s Duke and Duchess of Cambridge played a charity cricket match with underprivileged children in Mumbai on Sunday, the first day of their week-long tour of India that will include a trip to the isolated Himalayan kingdom of Bhutan.

Prince William and his wife, Kate Middleton, flew into India’s financial capital and met children from Magic Bus, Childline and Doorstep – three non-governmental organisations.
They took an open-top bus tour and played the match with a team from a local cricket academy and children backed by the three charities.
Kate, in sunglasses and a red, white and blue summer dress, faced a few deliveries from Indian cricket legend Sachin Tendulkar. She struck one ball only to be caught out, leading to a lively exchange between William and the fielders.
What was more exciting to see was former Indian cricketer Dilip Vengsarkar standing behind the wickets when the Master Blaster was bowling to Kate.
“What a fantastic experience it was to meet the Duke and the Duchess of Cambridge…remarkable couple,” Tendulkar told ANI.
“They made us feel so comfortable and were very humble and simple…It was nice to know that he (William) follows cricket.”
The couple had also stopped off at the Banganga Water Tank, where they received a special welcome. They were given flower garlands and placed petals in the water during a traditional ceremony.
William and Kate, travelling without children George and Charlotte, were due to attend a Bollywood-inspired charity gala on Sunday night amid speculation that Kate may appear in a saree from a top Indian fashion designer.
The royal couple had earlier paid tributes to the victims of the 2008 Mumbai terror attacks at a memorial at the Taj Palace Hotel.
Their tour takes in New Delhi, where they will lunch with Prime Minister Narendra Modi, a wildlife park in Assam famed for its one-horned rhinos, and Bhutan.
Their tour ends back in India next Saturday at the Taj Mahal, revisiting the scene of a solo – and much photographed – visit in 1992 by William’s mother, the late Princess Diana, to the monument of love.