Two Dead in Shooting at Joint Base San Antonio in Texas 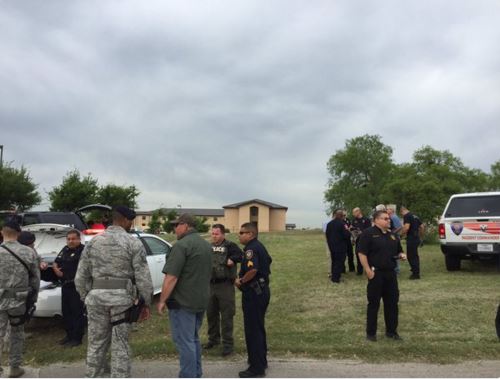 two men are dead in a shooting at a military base in San Antonio, Texas, authorities said.

The attack at Lackland Air Force Base, a part of Joint Base San Antonio, appears to be a murder-suicide, Bexar County Sheriff’s Office spokesman James Keith told MSNBC. The base said in a statement that there were no indications it was related to terrorism.
The gunfire was reported at about 8:40 a.m. local time, and when police and security officers arrived, they found the victims dead in an office in a building known as Forbes Hall, authorities said. Two Glock firearms were found at the scene.

It was the second shooting at Joint Base San Antonio since June 2013, when a retired Army sergeant shot his common-law wife, an Army captain, at Fort Sam Houston. She survived.

Friday’s victims remain unidentified; Air Force officials said they were waiting to release that information until after their families were notified.

Brig. Gen. Robert D. LaBrutta, the base’s commander, said in a news conference that only security officers and law enforcement are allowed to carry guns on the complex, and that it was unclear how the shooter managed to get inside while armed.

The base remained on lockdown for more than an hour after the shooting as authorities searched Forbes Hall and determined that the attack had ended.

Sydney Spalding was heading towards the graduation field to see a friend graduate from the Air Force when the base went under lockdown.

“We were driving around looking for somewhere to park and an announcement came on all over base saying there was an active shooter in building 147,” Spalding, 20, said. “You saw different airmen running in uniform and people spreading out. We were still in the car debating if we could leave. We parked and were trying to find somewhere to hide out and was pulled into a dark building to hide out.”